Lecce is an Italian town of 95.263 inhabitants, capital of the homonymous province of Puglia. Located in an almost central position on the Salento Peninsula, it is the center of a wide area made of municipalities in the northern part of the province.

The ancient Messapian origins and the archaeological remains of the Roman domination position it among the cities of art in Italy. Lecce is characterized by the richness and exuberance of the typically seventeenth-century baroque style of the churches and palaces.

The architectural development and the decorative enrichment of the facades were particularly cared for during the Kingdom of Naples and characterized the city in such an original way as to give rise to the definition of “Lecce Baroque”. Let’s see in detail the magnificent treasures of Lecce! 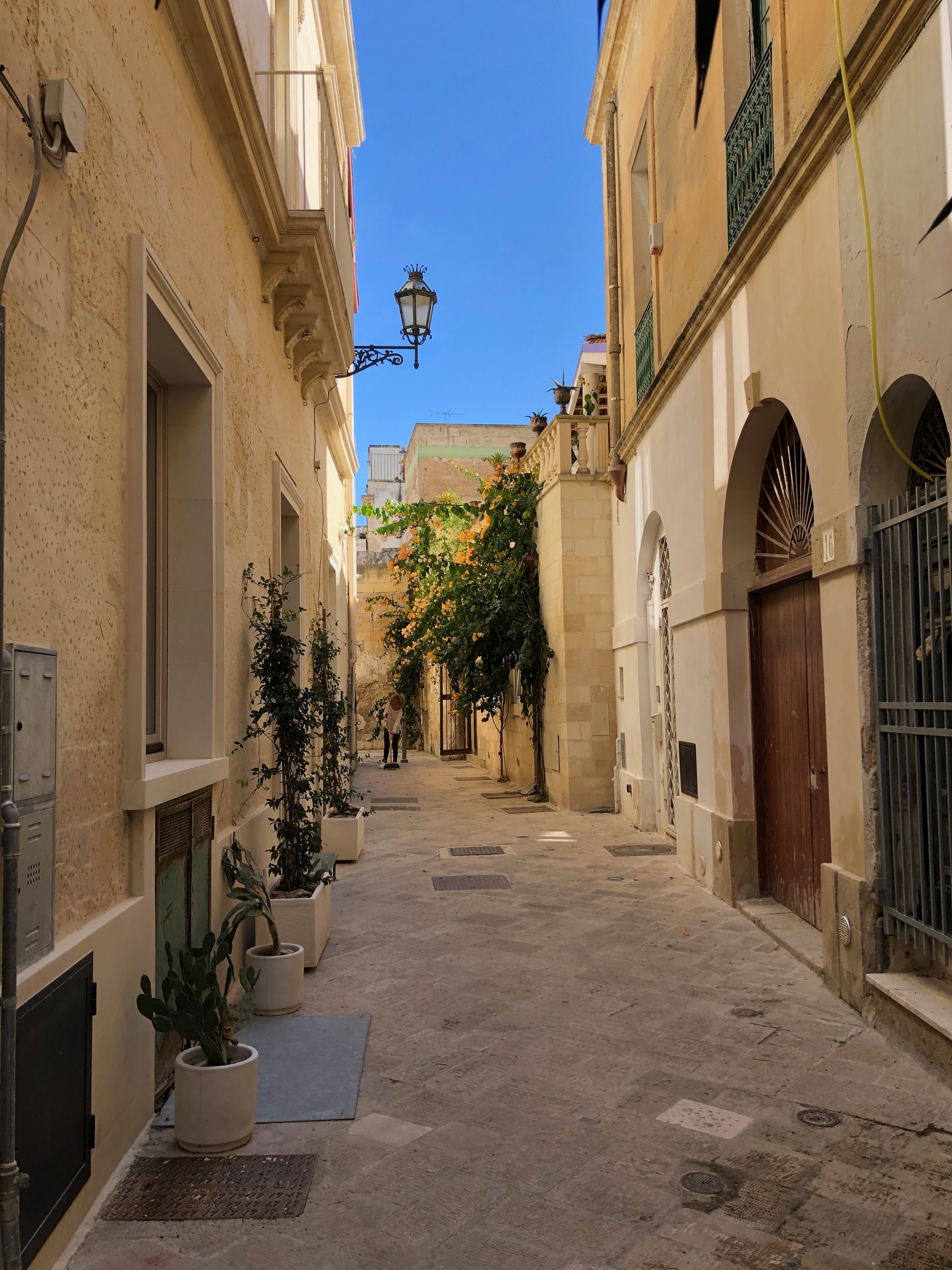 Built on a total area of 13,200 square meters, the Castle of Lecce is the largest in all of Puglia. Its design is due to the famous architect Gian Giacomo dell’Acaja by the will of the sovereign Charles V (1500-1558).

Composed of an irregular quadrilateral, partially set on a previous Angevin structure, the fortification has four imposing angular bastions.

For a long time, the Castle was used to defend the territory, subsequently one of its rooms was used to host theatrical performances (XVIII century), later it functioned as barracks and military district (from 1870 to 1979).

Today the Castle, owned by the Municipality of Lecce, is home to the Department of Culture and its rooms are used for cultural events, art exhibitions, food and wine events.

The building was built in 1144 by Bishop Formoso and rebuilt in Baroque forms in 1659 by the architect Giuseppe Zimbalo, the most famous and imitated architect of the Lecce Baroque: if you go around the historic center of Lecce, you will find many of his works including the church of the Rosary, the lower facade of the Celestini convent, the column of Sant’ Oronzo.

Duomo, which represents the fulcrum of the religious life of the city, has two entrances, the main one facing the Bishop’s Palace and the other, on the left side facing the entrance to the square.

The baroque interior preserves valuable stuccos, marble floors and other numerous paintings of great artistic value and twelve richly decorated altars including the main one dedicated to the Assumption of the Virgin in marble and gilded bronze of Neapolitan manufacture.

It is exactly in the Basilica of Santa Croce that the Lecce Baroque bursts in all its magnificence. Here the greatness of its architects, the mastery of its stonemasons, the flexibility of the Lecce stone finds its maximum expression. It was the most important construction site in Lecce between the sixteenth and seventeenth centuries and saw the succession of three generations of architects and workers. Triumph of flowers, fruits, twisted leaves, cherubs, allegorical figures with the large rose window in the center, the Basilica is the manifesto of the Lecce Baroque.

The basilica was started in 1353, but its patron, Gualtiero VI of Brienne died three years later; the works resumed only in 1549 thanks to the architects Gabriele Riccardi, Giuseppe Zimbalo and Cesare Penna, all from Lecce, and thanks to the collaboration of numerous craftsmen of carvers and stonemasons. The works were completed 150 years later, in 1695, confirming how ambitious the project was; the effects of their protraction are evident in the stylistic ambiguity of the facade, sixteenth century in the lower part and seventeenth century in the upper part.

The Basilica of Santa Croce is therefore an architectural jewel that is absolutely worth a visit: the extraordinary decoration of the facade, recently renovated, can be read as a treatise on theology, rich in symbolic and deep.

Piazza Sant’Oronzo has been named after the patron saint of Lecce since 1656, it is the ancient Piazza dei Mercanti. The morphology of the square changed in the early 1900s due to the excavations carried out and the discovery of the Roman amphitheatre, above which there were the shops of the merchants. At the center of the square, there is the Roman column brought from Brindisi on which the statue of Sant’Oronzo was placed, made of wood and covered with copper, whose ideation is by Mauro Manieri and replaces the previous statue, which was destroyed in 1737 which was was made by Giuseppe Zimbalo.

Next to the Amphitheatre, there is the Il Sedile and the Chiesetta di San Marco. In this famous square, there is still the famous Caffè Alvino, popular with Lecce people and tourists to taste the famous pasticciotti. On the north side of the square, the Brunetti Palaces – Scippa, Grassi, and the Banca d’Italia Palace.

The buildings that compose it, built between the Middle Ages and the nineteenth century, make up a heterogeneous architectural ensemble, the result of different styles which, however, coexist harmoniously.

From this square we can enter the alleys to discover the artistic beauties of Lecce.

Palazzo dei Celestini is part of that particular Apulian building heritage which has come to us preserving the architectural and decorative attributes that were typical in the period of greatest glory.

Once a convent, the Palazzo dei Celestini is also known as the Government Palace and is now home to the Prefecture and the Province of Lecce.

Palazzo dei Celestini is the former convent of the Celestini Fathers, housed here for three centuries until the Napoleonic suppression of 1807, when the monks were removed, and the building became the headquarters of the Land of Otranto.

Adjacent to the basilica of Santa Croce, the building is in a particularly strategic central position thanks to the double access from via Umberto I and viale XXV luglio.

The origins of the palace are uncertain. The most credible reference date back to 1154 when the Celestine Fathers began the construction of their new church, that of S. Croce and the adjoining monastery. They entrusted the construction to the architect from Lecce Gabriele Riccardi, starting what will go down in the history of Salento as the most famous basilica in Lecce, the most representative monument of Baroque art.

Currently, Palazzo dei Celestini houses the offices of the Province.

The Roman amphitheatre of Lecce

The Roman amphitheatre of Lecce is located in Piazza Sant’Oronzo. It was discovered between 1904 and 1938 and it is the most important testimony of Roman times. The amphitheatre was built in the second century AD to entertain, with the shows and games that took place inside, the passionate spectators What we can see of the Amphitheatre now is only half of it,  because the other part was not unearthed, as important centuries-old buildings stand on it, which are part of the scenario of Piazza Sant’Oronzo.

Its construction dates back to the 2nd century AD, and has a size of 102 x 82 meters, according to some calculations we can believe that the Roman Amphitheatre managed to hold almost 25,000 spectators.

Of the sculptural works recovered, the most interesting are a statue of the Goddess Athena (today exhibited in the Castromediano Museum), and some marble reliefs of the parapet that separated the two series of steps depicting hunting and fighting scenes between men and ferocious animals.

This little church in Lecce is part of the history of the Byzantine rite communities, very numerous in this area, and is a religious meeting place for the Albanian and Greek communities present in the city.

Until 1575, this parish had its headquarters in another church but, following the destruction of the latter, the Greek colony had to move elsewhere until it found a definitive settlement in the church of San Niccolò dei Greci. The latter was then rebuilt in 1765, with its beautiful late Baroque connotation, for Greek and Albanian merchants residing in the city.

Usually the churches of the Byzantine and Greek rites always provide a very limited access to the public, but managing to see it is definitely an experience to do!