The Achille Forti Gallery of Modern Art (GAM) in Verona hosts an exhibition entitled “Passions and Visions” – a story of its fascinating history dating back to the nineteenth century.

Through these, visitors gain an insight into the vision of four fundamental characters who helped shape the GAM – Ugo Zannoni, Achille Forti, Licisco Magagnato and Giordio Cortenova.

Following 700th anniversary celebrations dedicated to the late Dante Alighieri and his link with Verona, the GAM presents the public with its own modern collections. 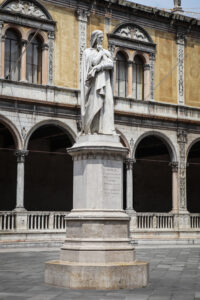 A visual story takes visitors on a journey spanning a century; from the end of the nineteenth century to the end of the twentieth century. It not only shows the history of the Gallery, but also that of the city and characters of its time.

The collection includes loans from civic and national museums, as well as private collectors and artists.

One such loan is a celebrated masterpiece from the Gallery of Modern Art in Rome: Bust of a lady (1907-1912) by Auguste Rodin.

The exhibition tells the story of the prestigious Veronese civic collection, seen in the historical, social and cultural context of the city. There is a particular focus on the Divisionist poetics and linguistic experiments.

A Tribute to the Contributors

The first focus is a tribute to the contribution of Ugo Zannoni of about 200 pieces between 1905 and 1919 which signalled the start of the Gallery. It is through his legacy that the GAM came to acquire various other collections from A. Puttinati, A. Dall’Oca Bianca, R. Fontana, to N. Nani, L. Nono and A. Recchia.

A particular turn-of-the-century art piece that made its way into the Neophyte and Nascent civic collection was S’avanza by A. Morbelli.

Achille Forti later donated his private collection upon his death in 1937. This led to the addition of further collections by famous artists from all over Italy and abroad – Meditation by F. Hayez and Pia dei Tolomei by PM Molmenti to name a few.

If you love art, history and opera, Verona is a place you must visit. Nestled in the Veneto region about an hour from Venice, it has so much more to offer than the Romeo and Julliette balcony it is famous for.