The German Aerospace Centre, which runs Germany's space program, have been testing lunar robots on the slopes of Mount Etna in Sicily. 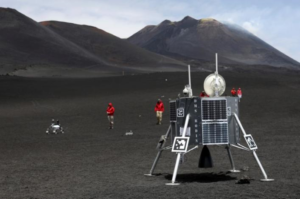 Looking at the bleak landscape, you could be forgiven for thinking that this photo was taken on some far-away planet. However, this is actually an image taken by Antonio Parrinello of German scientists performing tests on the slopes of Mount Etna in Sicily.

Because of its unique geological and atmospheric conditions, Mount Etna is popular with European and US scientists eager to assess lunar robots and space equipment in a setting that reflects the conditions the equipment may face in space. In these recent analyses, German, British, Italian and American scientists came together in Sicily to study robotic equipment that will be used in future space missions, including missions to Mars and the Moon, at Mount Etna’s Piano del Lago area, which is known for its strong winds and rocky landscape.

To find out more and to watch videos of the researchers, please see the Reuters website by clicking here.